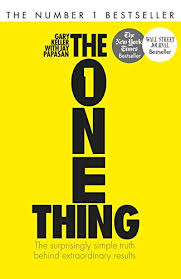 Gary Keller and Jay Papasan set the theme for their bestseller, by alluding to a dialogue between the late Jack Palance and Billy Crystal from the hit comedy, City Slickers. The conversation between a dour cowboy and a city slicker revolves around distilling the secret of life. Curly, the cowboy (Jack Palance) expounds to Mitch, the man from the city that the secret of life ultimately comes down to just “One thing. Just one thing. You stick to that and everything else don’t mean s**t.”

Personally I scoff when it comes to self-help and self-enrichment books. More often than not they are symptomatic of scenarios where a shadow is greater than substance. However, Keller and Papasan’s work constitutes a refreshing exception. Embodying practical ideas that are implementable, measurable and justifiable, “The One Thing” is a portable checklist for ushering in changes in life that have the potential to bring about enriching outcomes. So what is “The One Thing” all about? Keller urges us to distill our goals in life in a segmental manner. This segmentation results in bestowing attention, providing direction and employing razor sharp focus to the “ONE THING” by doing which “everything will be easier or unnecessary.”  So how does one go about doing the one thing?