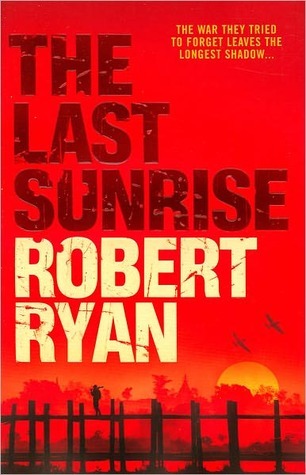 Dogfights in P-40s, dalliances with exotic women and wrestling with the controls of a C-47 all make for some riveting reading in Robert Ryan’s thriller, “The Last Sunrise.” The book alternates between the years 1941-1948 and the characters mostly find themselves traversing the terrains that cut across Burma (currently Myanmar), India, China and Singapore. The story begins in the year 1941. The American Voluntary Group, an Air Force unit has been put together by Colonel Claire Lee Chennault. Known as the Flying Tigers, the primary objective of this unit is to aid and abet the Chinese war efforts against the marauding Japanese who after having plundered Nanking, have their sights firmly set on other targets such as Kunming.

A part of the Flying Group set up is the flamboyant Lee Crane. An extraordinary capable fighter pilot, Crane is looking to notch two more kills before he can be designated an ‘ace.’ However, fate and love contrive to put a spanner in the works as Crane develops a dangerous dalliance with a curvy and sultry Anglo-Indian widow named Kitten Mahindra. Falling afoul of Colonel Chennault, when the Flying Tigers are absorbed by the US Air Force, Crane’s flying career almost comes to a careening halt, but for the intervention of Hyram Nelson. A key figure in the Office of Strategic Services, Nelson puts Crane in charge of manning a Cargo plane, to transport men & materiel over the “hump”, – three dangerous ridges forming part of the towering Himalayas. Crane loses touch with Kitten in the process.

On one such trip, Crane is acquainted with a striking young SOE agent, Laura McGill, and her companion a huffing and puffing giant of a man named Walter Gilbert. The trip from Calcutta to Southern China deepens Crane’s friendship with her. This platonic relationship also leads to unintended causal consequences as a chain of tumultuous events are set in motion when Hyram Nelson commands Crane to find out the exact role of Gilbert and Laura in the Asian sphere of operations. And when on a trip his own trusted co-pilot, going by the moniker of Cowboy points a gun at Crane’s temple and asks him to be his perpetrator-in-crime in a daring heist, Crane knows he is living on borrowed time.

Robert Ryan as usual dazzles with his description of various vintage aircraft and their prowess and pitfalls. He is like a fish in water expounding on mid-air combats, cockpit technicalities and payload perils. He manages to maintain his reader’s interest by sticking to a constant pace. Even though the narrative weaves back and forth, just like one of Crane’s aircrafts – between the years 1941, 1942, 1943 and 1948, the plot never gets either overwhelming or confusing.

The encounters between Kitten and Crane are poignant to the point of being tragi-comic. The Indo China geography is described in a marvelous manner that makes a mental visualization of the entire landscape surrounding the three ridges a veritable pleasure.

The Last Sunrise – A soaring read.