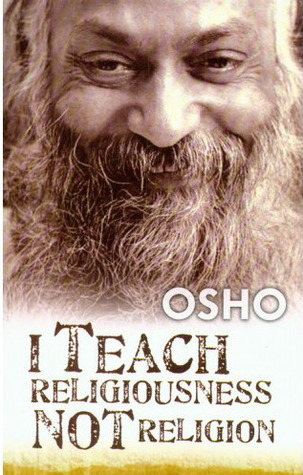 For those of you who are deeply religious and nurse steadfast beliefs, read no further. This book will leave you not merely nonplussed, but downright incensed. Trenchant, provocative, irreverent and radical, “I Teach Religiousness Not Religion” (the book) provides a more than just a sneak peek into the philosophy which made the self-proclaimed Godman Osho, one of the most reviled public figures in the realm of spirituality.

The book is a short collection of discourses where Osho holds forth on various topics in an attempt to clarify doubts raised by his devotees/disciples. The topics dealt with cover a wide gamut of subjects both complex and simple such as God, guilt, belief, meditation, laughter and enlightenment. Writing in a style that is deceivingly simple, Osho intersperses his philosophical musings with ribald humour, risqué anecdotes and arresting Zen stories.

So what is this religiousness that is peculiarly divorced from religion? This according to Osho seems to be a fluid, albeit shifting and vibrant concept. “Religiousness is a flowing river continuously changing its course but ultimately reaching the ocean.” The man might be an avid believer in Heraclitus. While this might offer the reader a few points to ponder what succeeds the definition is pure mayhem unhinged.

Taking a swipe at all religions, Osho terms them all dead rocks leading no one anywhere. But his most vitriolic jibe is reserved for Christianity. Arguing that in o far as harming the humanity is considered, Christianity stands at the very top, he goes on to back this incredulous and incendiary claim with equally outlandish justifications. Consider this: “they have used beautiful words to hide the ugly acts they are doing against you – for example, unselfishness. A man who does not know himself, to tell him to be unselfish is so outrageously idiotic that one cannot believe that for two thousand years Christianity has been doing that.”

One of the most controversial chapters in the book (a very difficult choice to make since almost every chapter seems to written with the intention of muckraking and stirring hornets’ nests), seems to be the one lashing out at Celibacy. Although not surprising from a man whose philosophical corner stone revolved around a concept termed “From Sex to Salvation”, the ire Osho reserves for celibates is putting it mildly – intense. Terming celibacy a ‘deadly virtue’, Osho blames the religious leaders for propagating this ‘unnatural’ phenomenon. Employing a logic that is downright illogical and a figment of rabid imagination, he goes on to argue that a natural outcome of celibacy is AIDS. Yes, you read it right! “Teaching celibacy is against nature. Then putting monks into monasteries and nuns into separate places and not allowing them to meet, you created homosexuality, you created lesbianism. And now homosexuality has brought AIDS. Every Government of the should declare celibacy a crime. And anybody who preaches celibacy should be immediately imprisoned, because he is the cause of a deadly disease, AIDS, which is spreading far and wide. Of nuclear weapons don’t kill you, AIDS will kill you.” Wonder what this man’s notions on Corona virus and Ebola would have been.

Waxing eloquent on David Yallop’s controversial book on Christianity and the Vatican, Osho spews fire on everything religious and its attendants. No wonder this man was threatened with dire consequences by the Greek law enforcement agencies and made to leave the country along with its commune.

Like an author pumped up to his neck in steroids, Osho also offers ridiculous and asinine suggestions to heal a fractured world. Asking the Jews to abandon Israel, he offers his commune in the United States to be occupied by them. This commune may then be termed Israel!

Most of the chapters are nothing more than mere rants and rambles. The pointless ambling is interrupted at points by an adult joke or a lewd parable. Truly the spouting of a man unhinged. Osho attracted controversy like bees attracted by honey. Seeking to flee the wrath of the Indian Government for his controversial views and practices, Osho or Rajneesh fled to the United States with 2,000 of his disciples, preferring to settling on a 100-square-mile ranch in central Oregon, which he named Rancho Rajneesh. There, Rajneesh and his devotees commenced to construct their own buildings and design their own city, which they unimaginatively called Rajneeshpuram.

Soon a flash point was reached between the local Government and the commune as its inhabitants went on a crazy spree of murder, wiretapping, voter fraud, arson and a mass salmonella poisoning in 1984 that affected more than 700 people. Deported by the United States Government and denied entry by many others the defamed and defanged Godman was forced to spend his remaining life in India, until his death due to heart failure in 1990.

I teach religiousness not religion – an obnoxious exercise in indecipherable blasphemy. 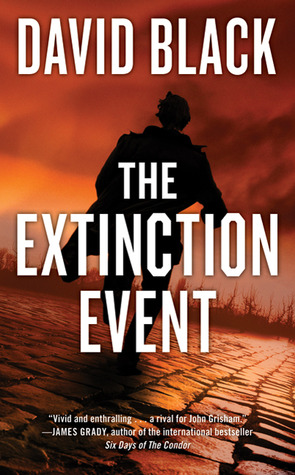 A lawyer, a hooker and a drug experiment gone wrong in a seedy motel sets the tone for David Black’s racy thriller “The Extinction Event.” Jack Slidell an irascible lawyer and a former street fighter is roused out of his sleep by a late night call in Mycenae, New York. The cryptic call leads Jack to a shady motel and to the dead bodies of Frank Milhet, his boss, Jean Gaynor, a hooker and traces of crack cocaine. What initially seems to be an innocuous case of sex and drugs gone sour, morphs into a murky maze involving international ecological implications. And into this maze, Jack gets drawn deeper and deeper with an unlikely companion to assist him in his endeavor to get to the bottom of the riddle. Caroline Wonder, a rookie lawyer in Jack’s firm and one who nurses a frosty relationship with Jack becomes a trusted all as the duo attempt to ward off bullets, betrayals, and barbed wires.

In so far as murder mysteries and conspiracy theories go, “The Extinction Event” does no better than its companion next door. Although making for a Pacey read, there is nothing to distinguish this pot-boiler from a million others from the genre. There is also a forced attempt to make Jack Slidell more flamboyant, boorish, charismatic and a punch line spewing Bond, leaving a jarring impact on the reader. This where James Bond-meets-Indiana Jones-meets-John rebus attempt does more harm than good from a narrative and plot perspective.

There come and go in a breezy fashion a phalanx of characters each one more insidious than his or her predecessor in both intent and execution. There is Cowboy, a hit-man and an almost personal stalker of Jack. He stalks Jack with the same determination of a Moriarty stalking Holmes, but with a suaveness that is exasperating and a silence that is frustrating. Other than nodding heads, civilly tracking Jack and of course attempting to murder him, all that the Cowboy seems to be doing is to compete with a perpetual motion machine. There is Mama Lucky, an extraordinarily obese woman who runs a brother and subsists on Jack Daniels. She also turns out to be a very able informant passing vital pieces of information to Jack.

After multiple pages of irrelevant dialogues, inchoate encounters and implacable emotions, we are left with an ending that is more philosophical than fictional. We are left to scratch our heads in both bewilderment and disbelief and left wondering whether it was worth the while trudging through the pages only to be met with what has to be one of the most ambivalent climaxes in the recent fictional literature past.