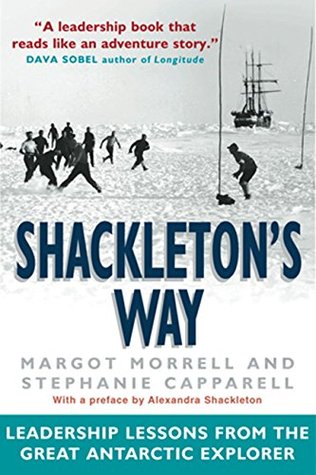 For the unsuspecting, Shackleton is the very stuff of legends. An indefatigable man of the sea, he pulled off what arguably has to be the greatest ever polar escapes. When his ill-fated ship, Endurance was first hemmed in by unrelenting blocks of ice before ultimately breaking up in front of the crew, Shackleton not only ensured that the morale of his men remained intact, but also promised them that he would lead each man to safety. And he more than made good his word. Pulling off what can only be termed an extraordinary feat of human resilience and endurance, he along with a handful of his crew sailed in the boat James Caird to the nearest whaling station located many miles away from where the crew was stranded. Not bothering about either his physical state or mental fatigue, Shackleton proceeded to borrow a ship, coming back to the rescue of his thankful men.

Reconstructing Shackleton’s diary entries, interviewing management, business as well as scientific experts and bringing on their own experience, Ms. Morrell ad Capparell come out with a guide/checklist based on ‘Shackletonian’ values and principles. The fact that Ms. Morrell has studied Shackleton for a decade and a half must not have hurt either.

The authors also supplement their own words of wisdom with the views of a select few business leaders such as include the insights of a handful of modern-day leaders, including James Cramer, of TheStreet.com. As explained by the authors subsequent to the loss of the Endurance, the twenty-seven members of the crew were forced to camp inside makeshift tents on tenuous, shifting blocks of ice. It was during this crucial time that Shackleton brought all of his wit, wisdom and determination to bear. Making the men responsible for their ow fates and ensuring that they grasped the enormity of the tasks on hand, he also put into motion a concrete rescue mission that involved amongst other aspects, the men keeping themselves fit and in good humour. He never allowed the spirits of even a single man to either wither, wane or waver.

Keeping his men engaged in various forms of activities from playing the banjo to celebrating Christmas, Shackleton was the epitome of hope and optimism. Using psychological tactics that would have made even Freud proud, Shackleton ensured that nay sayers and prophets of doom were always in the near vicinity and proximity of the leader himself. This tactic not only ensured that the skeptics slowly turned around to embrace Shackleton’s views, but also there was no transmission of negative feelings and /or acrimony.

Shackleton never indulged in petty politics or blame games. The buck always stopped with him and he assumed total responsibility over the well-being and action of his crew. And as

To quote Nancy F. Koehn a historian and professor of business administration at the Harvard Business School who reviewed the book in the New York Times. “As soon as I first read about Shackleton, I was struck by how critical a leader’s personal commitment to his or her mission is,” said Lynne Greene, global president of the beauty brands Clinique, Origins and Ojon, part of the Estée Lauder Companies.

Shackleton also identified, evaluated and approved his crew with great meticulousness and caution. “Science or seamanship weighs little against the kind of chaps they were,” he is famously said to have remarked. Hence a person with a sense of humour secured his place on the endurance as did another who made it on time to an interview on a weekend in battering rain after having had to change multiple trains.

Every Chapter in Shackleton’s way is succeeded by a real life story where the protagonist based his success on the Shackleton Way. For example, Astronaut James Lovell of the disastrous Apollo 13 flight states, “I think Shackleton took the same attitude we took on Apollo 13: You have to look forward as long as there is a chance,” Harvard Business School graduate Luke O’Neill who christened his nonprofit school network Shackleton Schools told the Wall Street Journal “Never give up, don’t be afraid to lead, follow your gut and remember, it’s about people.”

Shackleton’s Way – a fitting tribute to a towering leader.