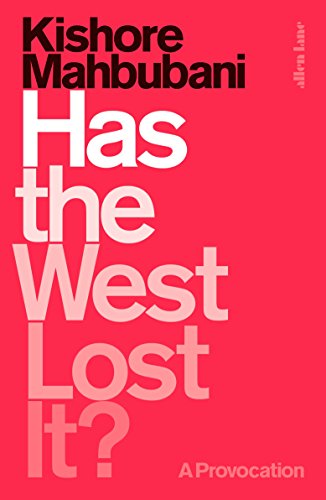 In this stirring polemic, one of the most pre-eminent thinkers of our time bursts the Western myth of intransigence, condescension and impunity undergirding the West v Rest relationship. Calling for a deeper, rational and more empathetic engagement, Kishore Mahbubani, exhorts the West to inculcate a desperately needed nuanced and balanced approach while dealing with the world.

Bemoaning the current ideologies employed by the West to both deal with and impose their terms upon the ‘Rest’, Mahbubani quotes the perennial strategist Machiavelli who was a great proponent of adopting strategies to suit changing times. “The prince who relies entirely on fortune is lost when it changes. I believe also that he will be successful who directs his actions according to the spirit of the times, and that he whose actions do not accord with the times will not be successful.” Strains of Machiavelli echo in both an explicit and implicit vein throughout this short but compelling work.

Mahbubani, after acknowledging the gift of ‘reasoning’ which the Western world bestowed upon Asian societies, proceeds to elucidate how the beneficiaries took maximum malleable advantage of such a powerful gift. This was accomplished by what Mahbubani terms, ‘three silent revolutions.’ Silent, because these transformations that have the potential to be a game changer in future, have gone totally unnoticed by a slumbering West. The revolutions themselves, being political, psychological and governance. The upheavals triggered by these revolutions have had a reverberating impact on both the fortunes and futures of nations from China to India to Ethiopia and Kenya. There is a refreshing sense of belief amongst these nations that they can be the ‘locomotive’ of change that influences world polity.

Mahbubani comes down heavily on what he calls the Western ‘hubris’. A hubris that has at its heart the concept of Francis Fukuyama’s “End of History”. This hubris manifests itself in mindless acts of aggression such as the Iraq invasion and an inveterate predilection to meddle in the affairs of other nations. Also the queasy relationship between Islamic States that provokes universal antagonism also accentuates an uneasy balance in relationships. In the words of Mahbubani, “the West makes one fundamental mistake in all its dealings with the Islamic world; it underestimates the religion of Islam.”  The expansion or a determined attempt to expand NATO into the previous Warsaw pact countries such as the Czech Republic, Hungary, Poland, Latvia, Lithuania, Romania and Slovakia has directly or indirectly resulted in a strongman such as Vladimir Putin assuming unshakeable power in Russia.

So what is the solution to redress this grievous imbalance? Mahbubani proposes a ‘new grand strategy’ that has at its heart the tenets of Minimalist, Multilateral and Machiavellian notions. The minimalist approach advocates the West reigning in its influence over various regions and ‘stepping back’ from its probes into the internal affairs of other countries. The multilateral strategy requires the West to ‘understand’ the Rest better. Relegitimization of the United Nations is one step in the right direction. The fact that a rapidly growing economy and the world’s largest democracy that is India has been constantly thwarted in its mission to obtain a permanent seat in the UN Security Council speaks a lot for a crying need to reform. The third strategy, of Machiavelli requires the West The third strategy, of Machiavelli requires the West “to learn more from Machiavelli and deploy more strategic cunning to protect its long term interests.”

Mahbubani concludes by warning that if the West does not pay heed to the aforementioned three principles thereby fostering a more inclusive approach towards how it views the Rest, it is only a matter of time before it would have totally lost it!

Donald Trump would do very well to read this small but powerful book, but then again reading does not tantamount to understanding!