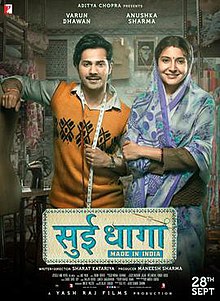 A wholesome entertainer, ‘Sui Dhaga’ is a Horatio Alger movie with a marked desi flavour. Staid, prosaic and yet warming the cockles of every heart, Yash Raj films have attempted, and succeeded in delivering a film that is sub par on the stereotypical glamour quotient, but packing a punch on the substance front. If you expect to see dainty damsels clad in revealing chiffon prancing around trees, and chocolate boy heroes clumsily strumming guitars all the while reminiscing about their muses, then ‘Sui Dhaga’ is not the movie for you.

Mauji (Varun Dhawan) undergoes a series of humiliating taunts courtesy his employer, a dealer in sewing machines and driven by extreme exasperation quits his job after a melt down. Mamata (Anushka Sharma), his muted but powerfully influential and immensely well balanced wife supports his move and goads him on to be an entrepreneur. Facing intense opposition from his pessimistic father (Raghuvir Yadav) and having to put up with the nagging pleas from an ailing mother, Mauji is at a cross road in his life. Battered by an uncompromising world and bounced around amongst people with ulterior motives, Mauji has only the ever reliable Mamata to bank on if he has to succeed in his endeavour to carve out a niche for himself.

Varun Dhawan essays a commendable performance as a naive, honest and hardworking Mauji. He has acted out of his skin to make himself relevant, indelible and immaculate. This performance will undoubtedly go a long way in paving the way for Dhawan to carve an inimitable niche for himself.

If Mauji is the heart of ‘Sui Dhaga’, Mamata is its pulsating, calculating and remarkable brain. Sui Dhaga is made for, by and of Anushka Sharma. Effortless, fluid and phenomenal she carries the movie on her slender albeit able shoulders. Thoroughly de-glamourised and possessing a screen presence that is powerful, Anushka has pulled off a veritable coup. Standing like a rock beside her struggling husband, she punches beyond her weight to make things happen for him.

Raghuvir Yadav is his usual brilliant self. He irritable and gruff manner paradoxically endears him to everyone as does the incredible innocuousness of Yamini Das (Mauji’s mother).

The rest of the ensemble is stellar in the roles carefully devised for them and there is not a single character who either disappoints or disgruntles.

‘Sui Dhaga – Made In india’ – tailored to perfection!